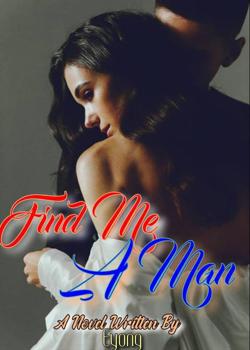 Find Me A Man

At 25, Baker Lawson is a successful young woman and the only child to one of the richest men in the country. Her life was perfect and she was envied by almost every girl of her age, not nothing that Baker had everything except a Man. Her happiness was shattered one evening after a confrontation with her father telling her to bring in a man or forget about her inheritance. Damaged from her father's words, she runs off and falls in the hands of a prominent miscreant and that was Carter McCain. Unknown to her, he was the leader of the notorious gang in that area but something sparked off the moment they both looked at each other. Baker, in her frustration, asks him to marry her and save her from the shake and pain that she was feeling inside. Carter was a 30 year old young man who had a record of sleeping with different ladies as they wanted him for either protection or his good looks. He accepts Baker's proposal and following her instructions, he was finally able to gain favor from her father and they got married. Their honeymoon was perfect and Baker was happy being with him as her feelings had begun to grow. Thinking of the fact that what they had together was just a deal and it will come to an end someday, Baker was ready to confess her feelings to Carter, when she was told by his friend that he was still meeting with his ex-girlfriend and she was pregnant for him. Not being able to take the news, Baker confronted him and told him to start packing his bags as the contract did not make sense to her anymore and Carter controlled by his anger, said that he was not going to leave excepts he gets half of what she is. The shock on her face was heavy as she could not believe what he said, Barker, gave him a disgusting look, blamed herself for getting involved with a thief. Her heart had melted and she had left for a nearby club to distract herself when Carter had arrived there too. Not being able to control his anger as he saw men trying to violate her, he fought with them and took her back home where they made out again. When she woke up the next morning, Baker was mad with rage as she could not believe that Carter had taken advantage of her and due to that, she left the house and disappeared into thin air. One day, Bronson, saw Baker in a shop and she looked pregnant, taking out his phone and making a call to his brother, he told Carter what he had just seen and he decided to follow her there. Not being able to contain himself as he had to tell Baker how much he loves her and how sorry he was for behaving like a fool, he equally wanted to find out whether or not the baby in her womb ess. he's Will Carter get to know the truth about how much she loves him as well?, will Baker tell him about the paternity of the child that she is carrying? or with both the love for him and the baby in her womb bring her to forgive him and have a complete family?. Find me a man has the answer to these questions.